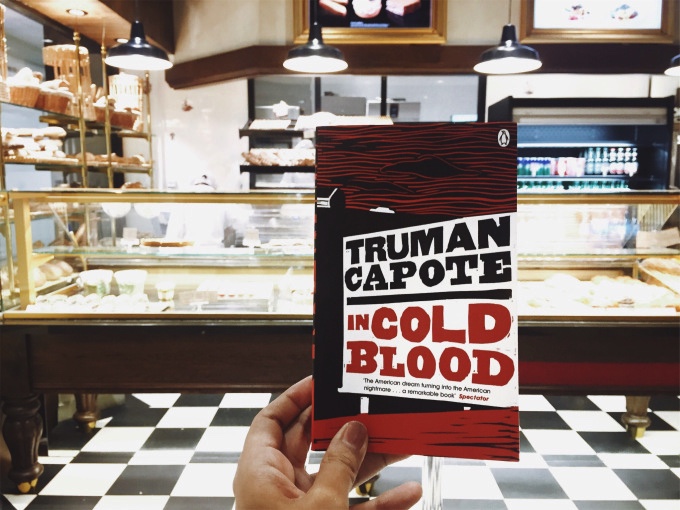 On November 16, 1959, The New York Times published an account of murders, which began:

Holcomb, Kan., Nov. 15 [1959] (UPI) — A wealthy wheat farmer, his wife and their two young children were found shot to death today in their home. They had been killed by shotgun blasts at close range after being bound and gagged… There were no signs of a struggle, and nothing had been stolen. The telephone lines had been cut.
—The New York Times

This article was an inspiration for Truman Capote to do extensive research and write ‘In Cold Blood’. Critics said that the book started a new genre, nonfiction novel.

Capote began the book with a chapter titled ‘The Last to See Them Alive’, set in a day before the murders took place. It started with The Clutter family morning routines. Mr Clutter’s had his breakfast (apple and a glass of milk), Nancy, their 17-year-old daughter, rushed down to pick up a phone call after Kenyon, her 15-year-old brother, hollered for her to come downstairs. A friend was coming to learn to bake a cherry pie. Mrs Clutter came downstairs for coffee complaining about her headache.

The first few pages almost made me forget that this was a real family and that the crime that would take place later in the day was a real crime. In this chapter Capote also introduced the killers, Dick and Perry. He wrote in detail about their activities towards the event, places they went, people they met, and things they bought in order to accomplish their evil mission.

What made me feel that this was more fiction than reality was the other characters in the book: Nancy’s best friend and boyfriend, the family’s neighbours, the town postmistress, the farmers, Mr. Clutter’s employees, Perry’s father and sister, Dick’s family, the inmates they had in the penitentiary, and also the Kansas Bureau of Investigation agents, Agent Dewey, Agent Nye, Agent Church, and Agent Duntz. Capote gathered 8000 notes in his research by talking to these people and it took him six years to complete the book.

Critics believed that some dialogues and events were made-up for dramatisation. However, Agent Dewey stated that most of the book was factually accurate. I haven’t read many true crime nonfiction, but one I have was written by Professor Keith Simpson, Forty Years of Murders. The book is an autobiography and reading it, I knew that I was reading a nonfiction. The facts were told in matter-of-factly way. The only thing that felt personal was the author’s point of view which, of course, understandable as he was the police pathologist himself.

In contrast with Keith Simpson’s book, In Cold Blood was told in a third person point-of-view. The readers were ghosts that hover into the Clutters homes, the murderers’ thoughts, the investigation, the hunts, the trials, and finally, the execution. We have beautiful and dreadful quotes that illustrated the brutal nature of men, the irony of life itself, and the sadness (not just the gory details) of the crime.

“Just remember: If one bird carried every grain of sand, grain by grain, across the ocean, by the time he got them all on the other side, that would only be the beginning of eternity.”

“Imagination, of course, can open any door – turn the key and let terror walk right in.”

“Once a thing is set to happen, all you can do is hope it won’t. Or will-depending. As long as you live, there’s always something waiting, and even if it’s bad, and you know it’s bad, what can you do? You can’t stop living.”

“I thought that Mr. Clutter was a very nice gentleman. I thought so right up to the moment that I cut his throat.”

In Cold Blood was not just a book that records a crime, but also brought back those who are dead. The Clutters were not just ‘the victims’ and Perry and Dick were not just ‘the murderers’. There were some chilling moments when I realised I felt sorry for their childhoods and at the same time, frightened by remarks and comments they made regarding the murders. It was a melancholy true crime nonfiction, one that was well-written.

Is this the right approach to write a true crime? Is it wrong to enjoy reading a crime that actually happened? Of course, reading crime fiction is always enjoyable because you know those horrible things didn’t really happen. However, this isn’t the case with In Cold Blood. Morally, I felt guilty feeling thrilled reading how the killers executed the Clutters but I also felt that this dramatisation also served as an eye opener, humans are weak, evil, good, and damaged all at the same time. Law can put criminals on trials and in jails, it divides the society in either black or white, but this book gives us the grey shade we sometimes didn’t bother to think about, the human side of a murderer.

This edition of In Cold Blood is published by Penguin, part of Penguin Essentials collection.