Then a terrible shriek came from the middle of the crowd, as if someone has set his foot upon a burning thorn, as if his foot being nailed to the earth with nails of fire, as if flames were shooting through his marrow. The crowd fell apart, all eyes drawn to the foot to which the hand of the screaming man was pointing. On this foot sat the spider, black and huge, glowering balefully, maliciously all around.

There is sometimes a distinct difference in the terms ‘enjoying a book’ and ‘devouring a book’. The Black Spider (1842) definitely belongs to the latter category. I finished it in less than a day and closed the last page hoping to read more of the author’s books.

‘The Black Spider’ (Die Schwarze Spinne) translated by Susan Bernofsky (2013) tells a story within a story. The book starts with a morning so peaceful and sunny in a little Swiss village. A child is about to be baptized, and the family is busy preparing for the feast that follows the ceremony. Everybody in the village is present and they celebrate together over delicious meals; bread, meat, puddings, cakes, wine, soup. The description of the event is beautiful and poetic. I can almost feel the sunlight, taste the wine soup, feel the breeze sitting on the grass.

Then, triggered by a question, an old godfather tells a story to the guests – a folktale and, he believes, the history of the village which has been long forgotten and kept as a secret. And this is the start of the horror – all the sunny pictures described earlier in the book is gone – replaced by darkness, grim, and terror.

According to the old godfather, centuries ago, this little village had already existed. The hospital they have nowadays had been a castle ruled by a savage and cruel knight. The knight demanded lots from his people, he wanted a castle on top of the hill and forced the peasants to build one for him. For two years they slaved on, abandoning their crops, to build the castle. They had endured months of starvation and once the castle completed, they rejoiced. But the cruel knight wanted more. He asked for beech trees to be planted in the road leading to the castle. These trees had to be taken from a forest quite far from the village and he wanted it to be done in a month. The peasants were disheartened upon hearing the knight’s demand. They knew that it was an impossible task. While they were crying in despair, a huntsman in green with a red beard and a red feather on top of his hat, appeared before them. He offered help and he promised to do the impossible for them. When the peasants asked what he wanted in return, he answered, ‘Give me an unbaptized child’.

Each man fled after they learned the Evil One’s demand. They went back to their wives and told the story. Everybody was afraid, but one wife, Christine from Lindau. Christine believed that she could outwit the devil and she made a bargain with the green man. She said that the village people would give him an unbaptized child, thinking that once they planted all the beeches, they could always delay the payment. Obviously, that wasn’t what happened here.

In a month, one hundred of beeches were planted in front of the castle. However, even the cruel knight himself was afraid to walk under the shady trees as he had heard what pact the people had made with the devil. The village people were happy that they managed to finish the knight’s demand but when the first infant after the pact was about to be born, fear crept up among them. First, they hesitated to ask help from the priest because they were afraid that their treachery would be known but approaching the birth, they had no other option. The priest performed the baptism before the devil had a chance to snatch the child. Everybody rejoiced, they believed that they could outsmart the devil this way. The priest, a pious man, told them to stop celebrating and pray instead. The village people paid no heed.

This book has all the right formula that forms a good story. It starts innocently and as the story goes, we realise that it gets more complex. I also admire how Gotthelf patiently spins this story. Although the religious message is quite clear, it doesn’t lecture you. It takes you into the life of the peasants, their despair and horror. I was pausing between each sentence, thinking ‘come on’ just like the audience of the grandfather. But like them, too, I can’t help to shake off that feeling, that the devil is present and listening to the grandfather’s story together with us. Someone told me that if you’re afraid of the devil, you acknowledge that God does exist. Gotthelf successfully made me believe in both of them. 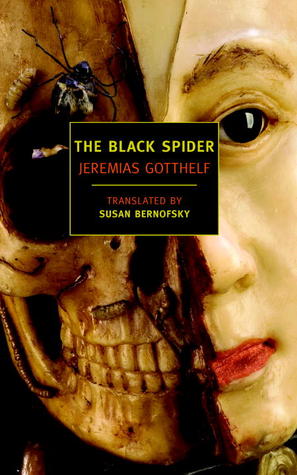 This edition of The Black Spider is published by New York Book Review Classics.